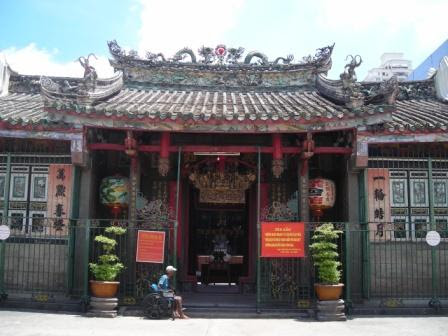 Vietnam has had a conflicted history with its great suffocating neighbour to the North, China. While much of Vietnamese culture and religion is identifiably sinific, the Vietnamese have been staunchly nationalistic and adamant about their ethnic difference since the beginning of recorded history. The unfortunate tendency of the Middle Kingdom to drift towards thecolonisation and oppression of its neighbours is still remembered bitterly in Vietnam, and with occasional vehemence. I can't find the quote anywhere (and do, please, someone let me know!), but Ho Chi Minh famously said something along the lines of "I'd rather be America's dog for a hundred years than China's whore forever."
The presence of the Chinese in Vietnam has also been notable for its occasional conflicts. Undoubtedly living there for as long as Vietnam itself has existed, the Chinese minority was consistently and almost universally despised, though these days that kind of vehement racism seems to have faded. The Chinese in the South had, of course, their famous city-within-a-city, Cholon. A vast Chinese ghetto on the outskirts of Saigon, Cholon was (and still is) home to immense wealth, enterprise and, invariably, vice. Cholon, with its craziness, over-population, filth and romantic propensity to wickedness has always enchanted European writers, who were much more bewitched by that city's obvious glamour and squalour. Graham Greene smoked opium there, Marguerite Duras was kept there as a lover of an idle young Chinese merchant, and my very favourite, the French Count Gontran de Poncins, lived there for a year with a sullen mistress while he wrote his travel masterpiece From a Chinese City.
The Chinese seemed always to drift toward the south of Vietnam, as far away from the Chinese border as possible. They settled in large numbers in the Mekong Delta towns, and driving through these areas now you still see Chinese family temples that have been there for centuries. In many cases they are quite new-looking, having been re-built and expanded with Chinese money from abroad.
The dominant ethnic group among the Chinese in Vietnam was (and is) the Teo Chiew. Indeed, the Teo Chiew seem to have been inveterate travellers, for they are also the dominant merchant caste in Bangkok, Phnom Penh and much of South East Asia. Where I live in South West Sydney, in the Indo-Chinese ghetto of Cabramatta, the Teo Chiew remain strongly represented, maintaining special temples, welfare associations and community centres. And this was the great genius of the Chinese diaspora: banding together in kinship groups based for the most part on ethnic and regional origin, and using these bonds to establish strong networks of community welfare, business and education.
These days the great commuity temples of the Chinese are still much in evidence in Cholon, despite a period of time when the ethnic Chinese were victimised and hounded out of Vietnam, immediately following 1975. Fortunately not all of them left, and it was the people who remained who have emerged as the great initiators of the modern Vietnamese economic miracle, particularly in the South. Anyone who has driven down Nguyen Trai on a Sunday night will be able to vouch for the continued energy, wealth and just plain fun of Cholon. It is a wonderful place, and somewhere I'd like to spend more time one day. Indeed, I've thought of re-creating de Poncins' book - minus the sullen mistress, of course - in 21st Century Vietnam. We'll see.
Teo Chiew dialect (Chao Zhou Hua) is commonly heard in Cholon, and among disaporic communities of Indo-Chinese in the West. These incredibly strong and universal tribes of Chinese fascinate me, and very little study has been done of them. But the Teo Chiew (cue a thousand different spellings - I'm sticking to this one), the Cantonese, the Hakka and the Fujianese are among the most widely-scattered and successful peoples on the earth. And most overseas Chinese can quickly identify to which of the groupings they and their ancestors belong.
Posted by Walter Mason at 12:11 AM