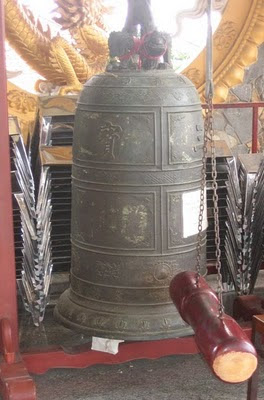 Big cast-iron bells are a necessary feature of all temples in Vietnam, and I am kind of interested in them. They are obviously an expensive item, but I have no idea where they come from - I've seen factories and workshops making all kinds of Buddhist ritual objects, but I've never come across a bell-making business.
Unlike in the West, the bells aren't necessarily very carefully pitched - normally just a dull, heavy metallic sound that can carry over the whole temple complex.
Often in the afternoon the bells are sounded for extended periods.
Bells are frequently covered with sheets of paper carrying prayers, especially for the sick.
This is a new-ish bell at a big temple in Thu Duc district, just outside Ho Chi Minh City.
Posted by Walter Mason at 1:48 AM No comments: