I find myself writing about the sampeah quite a lot in my new book, because it is a gesture that fascinates me.

For those who don't know, the sampeah is the greeting gesture found throughout Southeast Asia where the greeter brings her/his hands up in a prayer position in front of the body. Most people know it from a holiday to Thailand, where the ubiquitous gesture manages to charm tourists and encourages them to emulate it, normally to bad effect.

For the sampeah is a complex and finely instrumented gseture, and it incorporates tiny and subtle differences that change depending on who is greeting and who is being greeted. To make matters worse, these differences can themselves change from region to region. It is such a potential minefield that, in Thailand, Cambodia and Laos, I leave the gesture alone altogether, not wanting to offend unintentionally.


Apparently the sampeah was once in common use in Vietnam, but these days it remains only as a greeting within the confines of Buddhist monasteries, where it has been hugely simplified into one basic gesture, the making of the palms together "prayer" sign at chest level, the head bowed slightly. Anyone can master this, and its use is second nature to me when I visit monks or hang out at monasteries in Vietnam.

But not so in Cambodia. The thumbs must face different parts of the upper body according to the status of the person you are greeting, and to get this detail wrong can cause serious offence. Cambodian Prime Minister Hun Sen's wife recently caused an international scandal when she greeted President Obama with a sampeah intended for someone of lower status in what some say was a deliberate act.

The sampeah, too, has an unexpectedly traumatic history in Cambodia. Pol Pot banned its use during the Khmer Rouge years, identifying the status-conscious greeting as a remnant of feudal society. When I first went to Cambodia in 1996 I rarely saw the sampeah performed - people had simply fallen out of the habit, or had instructed their psyches to stop it during the years when doing it could get them killed. These days it is undergoing something or a comeback, and young people are taught the gesture and instructed to use it when greeting adults and monks. People in the 40 - 60 age bracket still seem to dispense with it, though.
Posted by Walter Mason at 3:20 PM No comments: 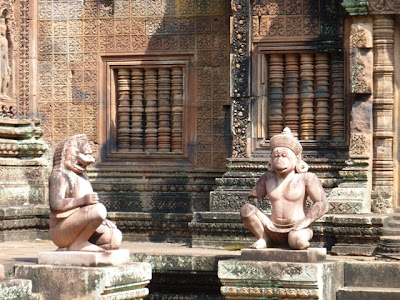 Banteay Srei is the exquisite and quite compact pink sandstone temple that sits about 30 kilometres away from the main temple of Angkor Wat. It was constructed as a religious retreat by a Hindu priest called Yajnavaraha, spiritual advisor to the King. It is a beautiful thing, its intricate carvings quite well preserved, and its interior sacred space still palpable in a strange way, surrounded by carved stone monkey protectors, garudas and demons. 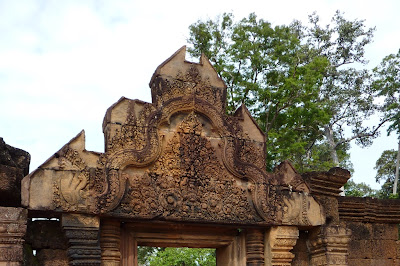 It takes the best part of an hour to get to Banteay Srei by tuk tuk from Angkor Wat, but it is well worth the trip. Some tour providers will tell you that it is not possible to visit the two sites in  the same day, but I have done so many times, and if you are time poor it is perfectly possible to see the highlights of the Angkor area in one day. 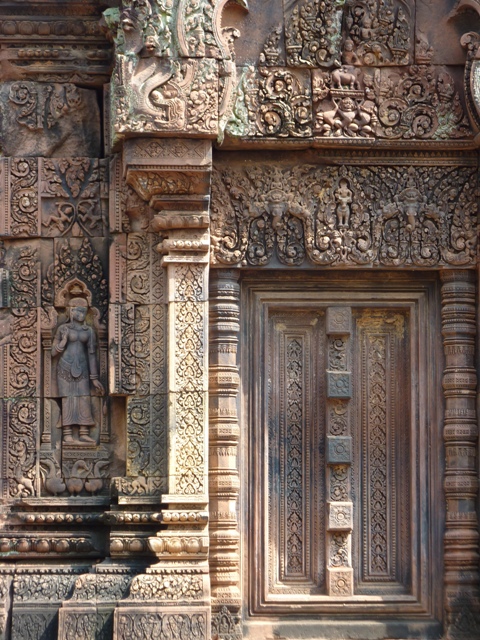 These days Banteay Srei is in a very well-kept tourist area, and there is coffee available there, as well as a whole complex of tourist shops. Bargain hard, and good luck, because the sellers are quite ferocious.
There are also a couple of quite good restaurants on the site, and it is well worth eating there, as they supply some quite good Khmer food - I recommend the Khmer noodles with a mild green curry, served with a bunch of exquisite fresh herbs foraged in local forests. 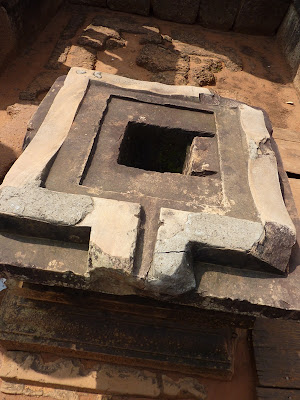 I'm not sure there is a particularly goood time to go to Banteay Srei. I have been at all times, and there has always been a dense crowd of tourists. It can actually become quite claustraphobic inside the temple complex because of the heat, the sun, and the heavy press of tourists. And God help you if you arrive at the same time as a busload of travellers from mainland China.


But you can deal with tourist crowds in a polite but assertive way. Just be prepared to push and shove, in a gentle and polite fashion, and don't get all angry if someone is standing in your way. They're on holiday too and have just as much right to take in the sights. And if someone shouts at you because you got in the way of their photo, just ignore them - they're being a dickhead.