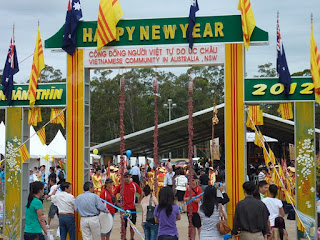 I don't know why I go to big, crowded public events anynore.
I am invariably disappointed.
I feel bored and tired before an hour is up, and in this instance my partner was part of the VIP party, so was trapped listening to interminable speeches for two hours or more while I paced around in the mud, increasingly bored.
The once great Cho Tet, the big festival to celebrate the Lunar New Year for the Vietnamese community, has become something of a shambles. The food is ghastly and it's always held too late to be of any truly festive significance. I mean, we know when the Lunar New Year is going to fall for the next 100 years or so. Can the organisers not book ahead to ensure they get the venue at the desired time?
I don't mean to grumble.
The dragon and lion dances were spectacular, really wonderful. They seemed to be the only properly organised parts of the whole event. 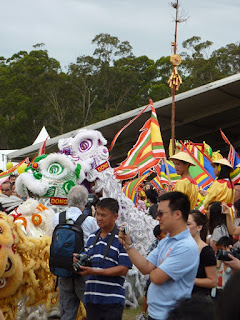 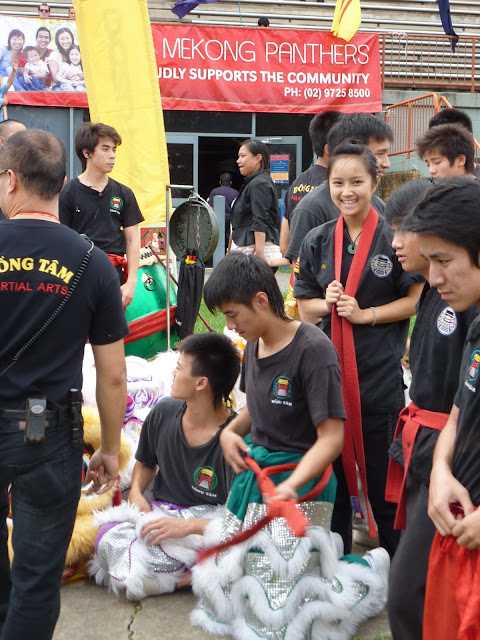 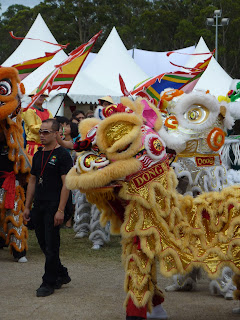 Here's some free advice to bring some heart back to this important event: 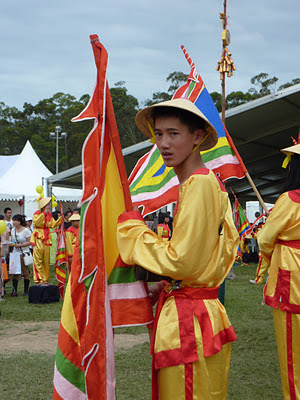 - Get some good food. Take a look at the much smaller Thai New Year celebrations at Wat Pa Buddharangsee in Minto. They manage to attract an array of truly fantastic food vendors, many of them representatives of iconic restaurants.

- Provide more seating. For some reason the entire under-cover area of the showground was roped off, including the toilet. This could have been hired as an area for people to sit and eat, with tables and chairs. And by the way, the five sad portaloos provided were a disgrace - they were already full at 6.30pm. There are many older people present who would hang around longer and spend more money if they could relax. As it is they couldn't get away quickly enough - the whole thing is dreadfully uncomfortable and physically taxing.

- Bring the community back. Allow the festival to reflect some of the colour and diversity of the Vietnamese community. The Buddhist temples, the Cao Dai groups - all should have some sort of presence there. Perhaps a tent for talks, lectures and cultural displays? People come for this sort of thing, not kiosks promoting the local clubs. In fact, why don't the local clubs sponsor such a tent rather than just handing out balloons and cardboard visors?

- Do something about the ghastly opening ceremony. Two hours + of speeches by dubious VIPs is simply unforgiveable in the 21st century. A neat half-hour of ceremonies is ample (indeed, generous), and then bring on the singing and dancing that people really enjoy. NO MORE SPEECHES.

With a bit of imagination and energy this yearly event has enormous potential to become a truly important part of the Australian cultural calendar. As it is, it's a disaster.

Posted by Walter Mason at 11:30 PM No comments: 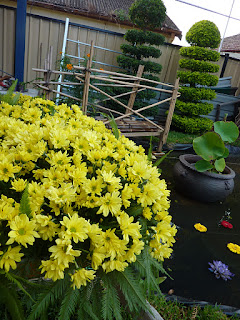 Our nearby temple is Chua Minh Giac, and one of the resident monks is a dab hand at decoration. 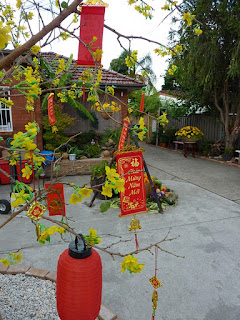 Every year he goes all out to create some elaborate themed gardens and displays for visitors who come over the Lunar New Year period. 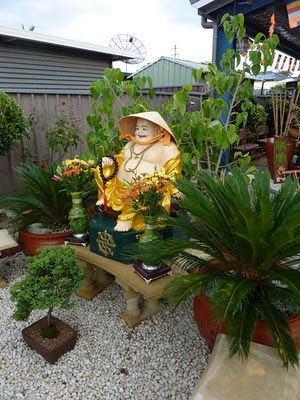 He has excelled himself this year. 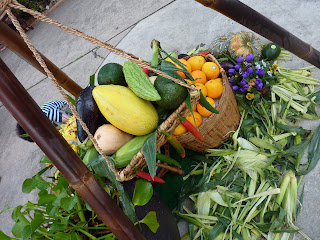 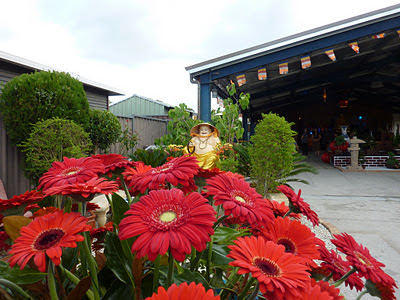 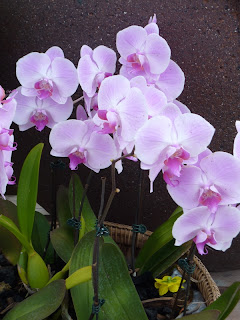 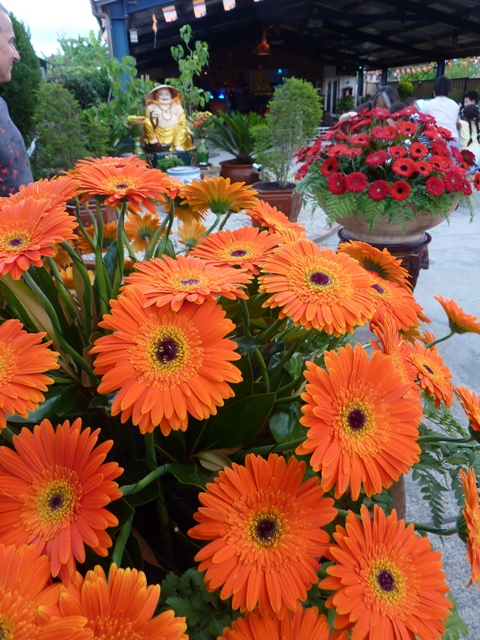 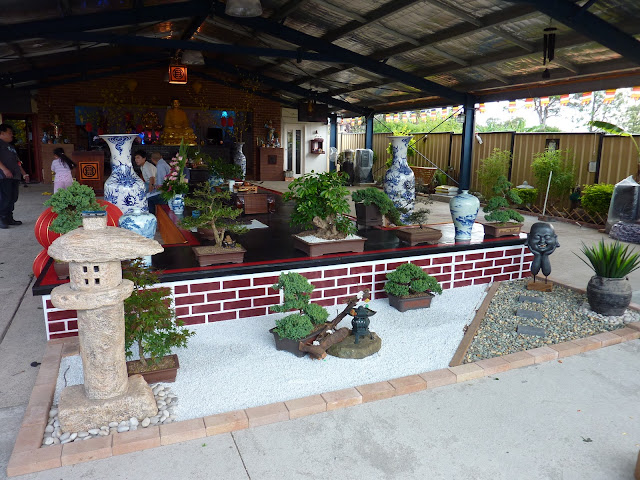 Minh Giac Vietnamese Buddhist Temple
42 St. John's Rd
Cabramatta
(The temple is about a 15 minute walk from Cabramatta station)
Open 7am - 8.30pm
All welcome - enter the main hall via the driveway to the left of the house. If the roller-doors of the main temple aren't up,  you can gain access via the doorway at the left of the complex at the back.
Shoes need to be removed before entering.

Walter Mason's book Destination Saigon: Adventures in Vietnam (Allen & Unwin) was voted one of the 10 best travel books of 2010 by The Sydney Morning Herald.
It is available as a paperback and e-book from all good booksellers and on-line.


Posted by Walter Mason at 3:38 PM No comments: 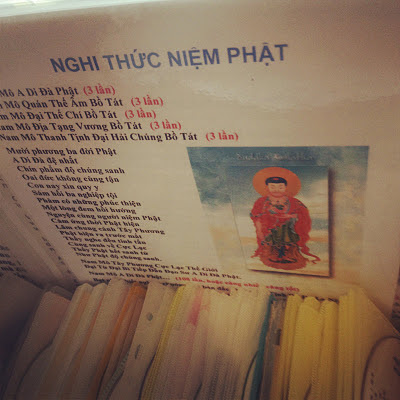 The vegetarian restaurants and supermarkets in Cabramatta, and many of the herbalists, all feature a little stand that gives out free Buddhist media - books, pictures, CDs, DVDs etc. The things are almost always in Vietnamese, but sometimes there is material in English, so they are always worth checking out.
This material is there for free distribution, so help yourself, if you are interested.
This is a laminated A4 poster which offers a program of chanting for the lay Buddhist.

The Teo Chiew Centre in Cabramatta 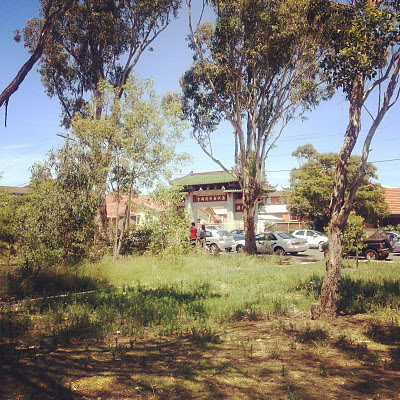 An under-utilised but wonderfully picturesque piece of orientalist architecture in Cabramatta, stuck between the Baptist and Catholic churches.
As viewed from Cabra-Vale Park.
I have written about the ubiquity of the Teo Chiew elsewhere.
Posted by Walter Mason at 3:14 PM No comments: