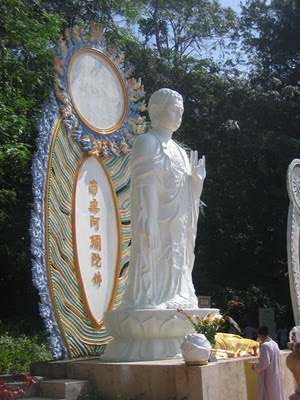 The name you will hear most consistently if you spend any time in Vietnamese Buddhist temples is that of Amitabha Buddha - or A Di Da Phat in Vietnamese. In his fascinating book Buddhism in America, Richard Hughes Seager calls Amitabha "among the greatest of the cosmic buddhas of the Mahayana tradition."
The vast bulk of Vietnamese Buddhists practise a basic form of Pure Land Buddhism, and for the most part the monks advocate recitation of Amitabha's name as the most effective form of religious practice for lay-people. This is what all of those wrist malas and long prayer beads are for.
Within the temple, Amitabha's name is also a kind of shorthand replacement for everything. When you say hello, you say A Di Da Phat, when you say goodbye, when you want to attract someone's attention and when you express surprise. Once I was at temple when one of the large vases that are found in the main prayer hall tumbled over and smashed, and a number of monks looked up and exclaimed, as one, A Di Da Phat!
The true form of Buddha recitation is, of course, Nam Mo A Di Da Phat. This is enunciated clearly during communal temple worship, but at other times it is shortened to Mo Phat, and this is in fact the standard greeting amongst Buddhists, both monastics and laity.
Despite his name being constantly on everyone's lips, statues of Amitabha Buddha are not normally very prominent at temples. It is rare to have him as the main object of devotion in the prayer hall, and he is rarely seen on other shrines. Normally there is a printed image of him on the wall in the monks' offices, or a small statue on a shelf somewhere. People seem to set much greater store on statues of Kwan Yin and Sakyamuni Buddha.
One place where an image of Amitabha does become important is at people's death beds, which is why monks always have a small-ish statue of him to hand to take to hospitals and houses of the faithful, should the need arise. It is thought that if the dying person lays eyes upon an image of Amitabha, they will be reborn in his paradise. In Tibetan Buddhism there are much more elaborate forms of Amitabha worship involving initiations and various other practices. But in Vietnamese Buddhism the devotion to Amitabha is restricted to the recitation of his name while using the rosary and, in a very few temples, the chanting of the Amitabha Sutra.
The image with this post is from the large Buddhist nunnery that stands atop the mountain overlooking Phan Thiet. It is part of a massive reproduction of the Pure Land Trinity that stands on a sunny terrace carved into the side of the mountain.
Posted by Walter Mason at 3:10 AM