Bonsai in Buddhist Temples in Vietnam

Monks are, naturally, somewhat restricted in the pastimes they can pursue.
Though they may play sports on temple grounds, hidden from the eyes of lay-people, and they may get enthusiastic about watching soccer on TV, generally they are forbidden from really indulging in sport as a hobby. That said, I once knew a monk in Saigon who was a keen body-builder. He eventually gave it away after a few years - he had come to the realisation that body-building was not quite in the spirit of his monastic vows.
Literature is, of course, an admirable pursuit for monks, and those who are talented enough spend their time writing or translating.
If they are wealthy, monks can turn their hand to collecting - Buddhist art, old manuscripts and antique vases are popular. I even know a monk who breeds pekingese dogs in his leisure time, though for some reason this makes me uneasy.
Monks can work on becoming artists and calligraphers, and sometimes flower arrangers - all are admirable skills in a monastery. Some turn their hand to the occult, and work on becoming expert at the I Ching, Chinese astrology and palm reading - this is all, of course, technically forbidden, but plenty of monks do it.
But there are three hobbies that monks in Vietnam excel at, and all are, in my book, exquisite and approrpiate. They are: tea connoisseurship, the growing of orchids and the cultivation of bonsai.

Bonsai are ubiquitous in the temple courtyards of Vietnam, and monks deal and trade in them. 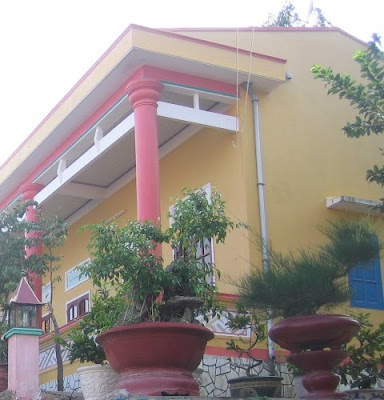 They can be quite expensive, and sometimes a monk is appointed as temple gardener in order to attend to the bonsai.
If a monk or abbott is really keen on them common areas can become somewhat over-crowded with these potted plants. 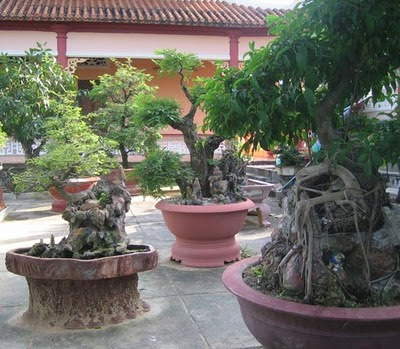 Some are also allowed to grow to enormous size - I'm not quite sure if, in this case, they are still considered bonsai (perhaps an expert can enlighten us?), but they are still cared for and cultivated in the same manner. 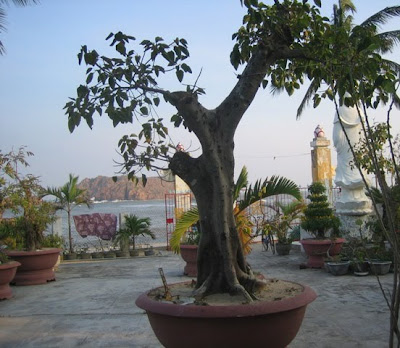 Popular mythology would have it that the roots (no pun intended) of bonsai lie in the patient care and eccentric eye of the Buddhist monks of antiquity. Certainly it is a stately, gentle pursuit, and one worthy of monastic attention.
Posted by Walter Mason at 12:44 AM