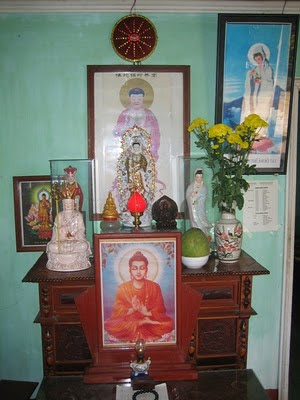 People often have a romanticised idea of the Buddhist aesthetic. Actually, people hold all kinds of unrealistic notions about many aspects of Buddhism, but the great cliche is that of the clutter-free, ultra-simple, zen-like atmosphere.
I'm here to tell you that Buddhist temples and monasteries are not like that. Especially not in Vietnam.
This is a shrine in a senior monk's room at the largest temple in Quy Nhon City. Actually, as these things go, it's quite restrained - I've certainly seen far more crowded shrines in my time.
But you can see, there's a certain dedication to colour, and plenty to catch the eye.
I actually like my Buddhism like this: colourful, chaotic, unpretentious and appealing directly to common ideas. I love that life in Vietnamese Buddhist monasteries can be chaotic and crowded, the shrines dusty and filled with tat.
Posted by Walter Mason at 4:25 AM

We LOVE Vietnam & loved our few days in Quy Nhon in 2008- then a quiet, lovely, Vietnam Holiday Resort! (I blogged about it extensively w/pix on www.southernwestvirginia.blogspot.com Posts after April 2008). We had an amazing time in the Central Highlands treking to villages with Huyen from http://www.vietnamhighlands.com/ and then took a taxi from Kon Tum to QN; the driver dropped us at the Hong Yang hotel where we got their honeymoon suite for approx $25/night w/a balcony overlooking the sea, a cafe restaurant on the beach, & a fun disco full of university students in their basement at night! We wandered the town & the beach, drank G&Ts, ate great tamarind crab & drank local liquors, saw NO tourists, & had a great, romantic time! :-)

Wonderful! You can still get a bargain at Quy Nhon, though they have also opened a resort spa there that I hear is very swish.
Many people say it is the real Buddhist heartland of Vietnam, and most monks there claim an ancient lineage.And then, of course, you have all the Cham culture.
A fascinating place.

I think the reason I have such kinship with Vietnam is because of the similarities to my own Latina culture. Replace the Buddha with the Virgen de Guadalupe and this might be something you see in a Mexican or New Mexican home. The colors, the vitality, buzz of life in HCMC is not unlike that of what inexperience in a big city in Latin America.