Water runs through many of Saigon's suburbs. Indeed, Ho Chi Minh City is really little more than a glorified swamp, hence the constant flooding throughout the rainy season. This is the reason for the traffic chaos, the perpetual filth and endless inconvenience of the current roadworks going on all over the city - the government is installing a new street drainage system which will (hopefully) make flooding a thing of the past.
Now the section of river that runs through my part of town was once a stinking cesspit issuing a stench so foul that it was actually difficult to walk near it. A whole miniature city of illegal pole houses covered most of the water's surface, and it was generally an extremely undesirable place to be. At some point the government knocked down all the houses (I think it was in the late 90s) and beautified the riverbanks, installing a series of one-way bridges that helped traffic flow and eased congestion. restaurants and cafes blosomed in buildings facing the river, making the most of the clean, grassy banks and cool river breezes.
That was then. 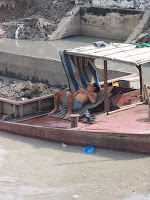 For some reason the authorities decided to tear the whole thing up again and do something else. 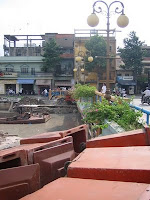 What that something else is is not exactly clear, as the whole process has taken years and years, and the riverside areas are once more stinking cesspits good for nothing but impromptu toilet breaks and spontaneous illegal cockfights. 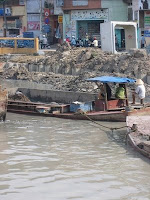 How fondly I remember those green grassy banks and the gentle sound of laughter drifting on a cool breeze from an elegant riverfront cafe......
Posted by Walter Mason at 7:34 AM