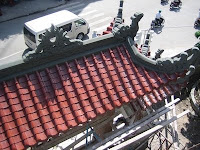 There is something of a temple building boom going on around Ho Chi Minh City at the moment. 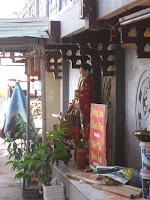 Buddhism is slowly accepting its status as the religion of the wealthy middle-classes in Vietnam, and a combination of financial forces means that City temples have, for the first time in a generation, the funds to renovate and re-invent. These forces include the increasing financial clout of the Saigonese professional classes, the injection of funds from overseas Vietnamese communities, and the diminishing size of monastic communities. In a very short space of time Buddhist monastic communities in Vietnam have begun to experience the same shrinking pool of vocations for the celibate life that the West has experienced for 40 years. While this is worrying for the future, it does have a positive short-term effect - the temples are no longer leaking money by being a halfway house for orphans, the marginally insane and the otherwise unemployable. There is money now to be made in Ho Chi Minh City, and being a monk seems far less attractive a meal ticket than it might have just a few years ago. 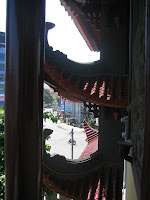 I was at Dai Giac temple yesterday, and observed the on-going re-construction of what was once a very humble little suburban temple (with a blind monk striking the bell in the afternoons, and a cage of irritable monkeys waiting to attack the unsuspecting passer-by). It is being transformed into something very new and very glamorous. 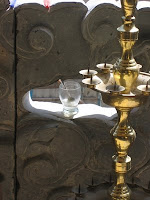 This process is happening all over town, at faster or slower speeds depending on the available cash. The crumbling old cement temples built for the most part during the American war years will soon be a thing of the past. 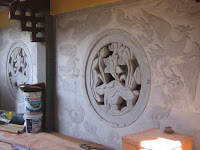