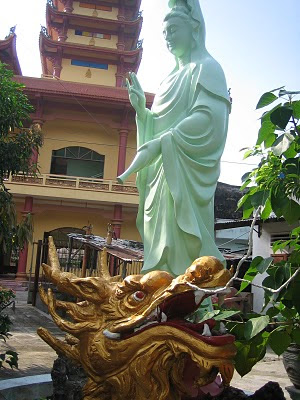 
The Bodhisattva Avalokitesvara is, of course, the deity more commonly known as Kwan Yin, or, in Vietnamese, Quan The Am.
Notice that Master Lok To refers to the Bodhisattva as "him." This causes much confusion, because in popular imagery Kwan Yin is almost always shown in a feminine aspect, and most people believe Kwan Yin to be a woman. Technically, Kwan Yin is without gender, though in the earliest representations (as in the scriptures) she is normally a he.
Posted by Walter Mason at 12:24 AM