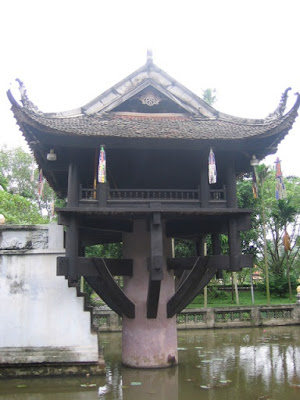 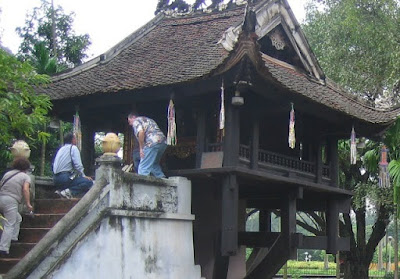 Along with the Dong Son drums and the conical hat, the One Pillar Pagoda in Hanoi (Chua Mot Cot) is one of the most common symbols of the Vietnamese nation. 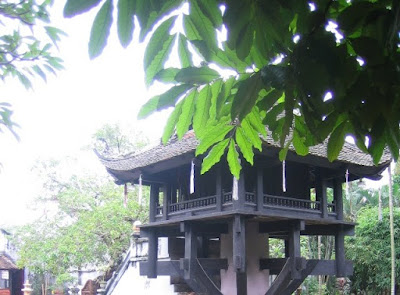 These days it occupies prime nationalist real-estate, occupying as it does a corner of the massive Ho Chi Minh mausoleum park. Indeed on special commemorative days (and there is at least one a week) the Pagoda is closed to the public because it sits so close to the mausoleum.
And while the site and probably the general shape of the Pagoda are ancient, the structure itself is relatively recent, having been bombed by the French in an act of singular nastiness in 1954.

These days it's quite a nice place to hang out and do some people watching. Though the coconut-juice sellers and other touts are particularly avaricious here, they'll normally leave you alone if you ignore them for a minute or two.
The attached temple is quite an oddity. It seems to be staffed by a single monk, and it keeps extremely eccentric opening hours. If you can get in there, it is well worth visiting. I have no idea if the Temple was destroyed in the bombing, but the design and structure seem to me to be authentic, so the re-construction must have been exactly along the lines of an older temple structure. 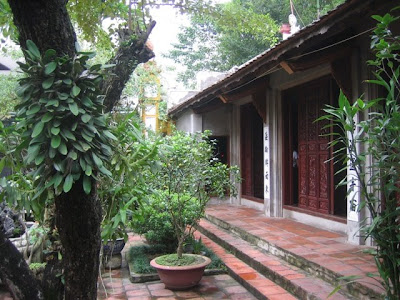 The statues inside seem quite authentically antique, and are beautiful examples of Northern Vietnamese Buddhist art - well worth spending some time with.
Posted by Walter Mason at 6:37 PM