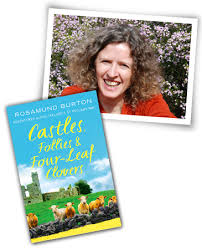 Illustrated with some of the most evocative photographs from her journey along St. Declan's Way, this is a unique opportunity to learn more about the deep spirituality of Ireland and see the beauty of its mystical landscape.

Come and hear travel writer and journalist Rosamund Burton tell of her adventures along Ireland’s ancient highway and pilgrim route St Declan's Way. Rosamund's adventures begin when she is lent a map of the ancient route. Stories of goddesses, ghosts and fairies are intertwined with the eccentricities and daily lives of everyday people—this is a journey full of surprises.

Posted by Walter Mason at 8:36 PM No comments: 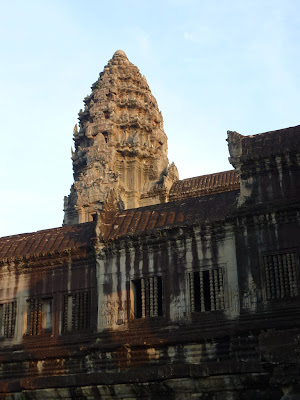 Just a reminder that I will be giving a talk about the wonderful Angkor Wat next week on the 24th of October. Details:

At the Southern Cross Academy of Light
Monday, 24th October 2011
St John’s Uniting Church Hall, cnr of Yeo Street and Barry Street, Neutral Bay. Enter off Barry Street. Session starts 7:30pm. Entry Fee: $15, concession $10.
Forgotten for centuries in the jungles of Cambodia, Angkor Wat was once the world's greatest and most sophisticated city. Re-discovered by French explorers in the nineteenth century, this massive stone structure was both a political and a religious centre, built to illustrate the creation myths of Hinduism, and later accommodating many of the schools of Buddhism. In this fascinating talk Walter will take us through the stories, history and meanings of the great temple of Angkor Wat.


Walter Mason is a travel writer whose book on Vietnam, Destination Saigon, was named by the Sydney Morning Herald as one of the 10 best travel books of 2010.
Walter is currently at work on his next book, a spiritual journey through Cambodia. He is also in the final stages of writing his doctoral dissertation at the University of Western Sydney's Writing & Society Research Group, where he is writing a history of self-help literature in Australia."
Posted by Walter Mason at 3:24 PM No comments: 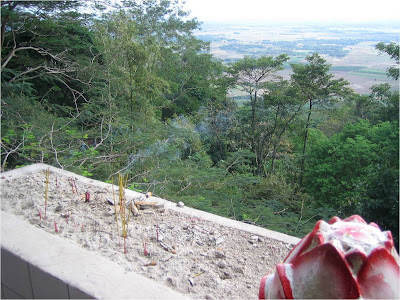 This is the shrine atop Nui Ba Den, the Black lady Mountain that rises up out of the plains of Tay Ninh that stretch from Saigon to Cambodia. Vietnamese tour groups always visit the mountain, but it is relatively unknown to foreigners. It is a place of immense mystical significance, said to house a Black Goddess whose power is so great that all around the Mountain is a vibrant Holy Land that was and is something of a spiritual powerhouse in Vietnam.

Posted by Walter Mason at 3:34 PM No comments: 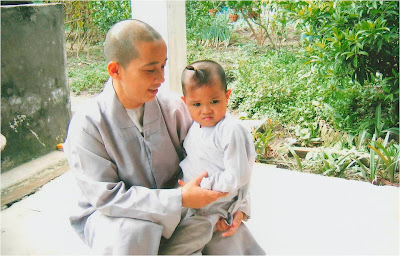 Sister Truth is one of the thousands of Buddhist nuns throughout Vietnam who do unpaid and unsung charity work, caring for the orphaned, the disabled and the destitute.

Here is an excerpt from my book Destination Saigon, telling a little bit of the story behind this picture:

Sister’s main problem is orphans. Hers is a small temple and a small community, with very limited space and resources. But, being in a poor area, orphans and unwanted children are plentiful, and every month she finds a baby dumped on her doorstep, or a desperate mother appears at her quarters begging her to take her children. Almost the entire community of nuns in Binh Chanh is made up of orphan girls who have decided to embrace the religious life (and there is no compulsion to take the robe). The littlest nun is only five, and is adored by Sisters and disciples alike. She is very fat and very forward, with two top knots poking from her forehead, the rest of her head shaved.

In spite of herself – for she likes to cultivate something of a hard-hearted exterior – Sister Truth dotes on the child, and spoils her terribly. She had been left by her mother at the temple some years ago, and no-one had ever been back to claim her or see her since.

“When she first asked me who her mother was, I told her it was me,” said Sister Truth. “Lately she has been going to infant school, and after mixing with the other children there she came home one day and asked me who her father was. I told her it was the Buddha. I told her I loved the Buddha so much that he gave me a special child, and that was her.” She called the little novice over and, stroking her topknots she absently asked her, “Who is your mother, child?”

“The Abbess!” cried the little girl, throwing her arms around the Sister.

“Mr. Buddha!” she cried, pointing towards the prayer hall.

Posted by Walter Mason at 10:07 PM No comments: