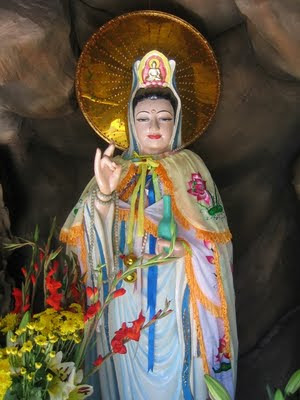 Quan The Am is the Vietnamese name for Kwan Yin, the Buddhist Bodhisattva of Compassion, commonly known in English as the Goddess of Mercy.
Quan Am is everywhere in Vietnam, and many people have a special devotion to her. When I first visited Vietnam one of the things that really struck me was the ubiquity of this deity. There are shrines and beautiful statues of her wherever you go - in temples, on street sides, in people's houses. After spending a lot of time in the country, I really feel as though Quan Am is one of my own special protectors.
She also figures prominently in my book, Destination Saigon. I had never really intended for her to be there, but in several chapters she appears. Obviously the energy of the Goddess was flowing through my creative endeavour!
Most temples will feature a large outdoor shrine to Quan Am, and these shrines can become quite baroque affairs. 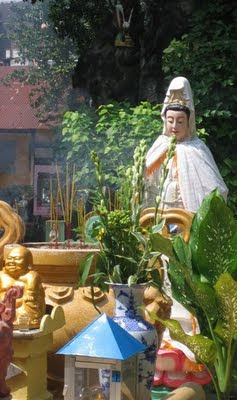 If people feel that a particular shrine has a strong spiritual power, if they feel that prayers made there were answered, they will offer money to renovate and improve the shrine, hence their frequently elaborate appointments. Another way to say thanks for prayers answered is to adorn images of the Bodhisattva with costume jewellery, or have special cloaks made for her. Sometimes popular statues can become quite bulky with all the extra gifts, and most temples keep a schedule of people allowed to provide clothing for the deity at certain key points of the religious year. 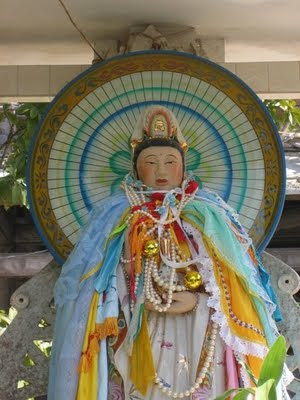 Of course, Quan Am has many forms, and her strong point in the popular religious imagination is her ability to take on different shapes in order to help people or teach them a moral lesson. One of the more common and easily recognisable manifestations of Quan Am is Chuan De, the multiple armed and multiple headed Goddess who seeks to propagate the Buddhist message using the array of symbolic instruments she clutches. 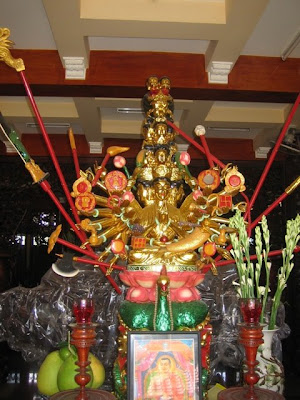 Among overseas Vietnamese communities Quan Am is especially important, as many credit her with protecting the boat people and overseeing their safety and resettlement. That is why her blissful form can be seen gazing out from the front yards and temple gardens of suburban Sydney. 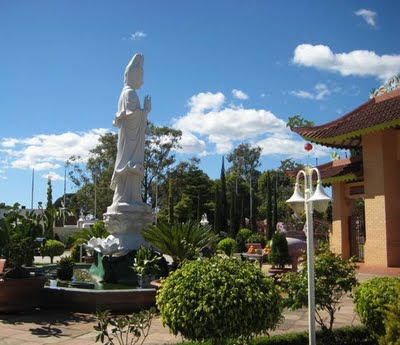 I am happy to think that I always rest under the gaze of the Goddess of Mercy!
Posted by Walter Mason at 1:25 AM